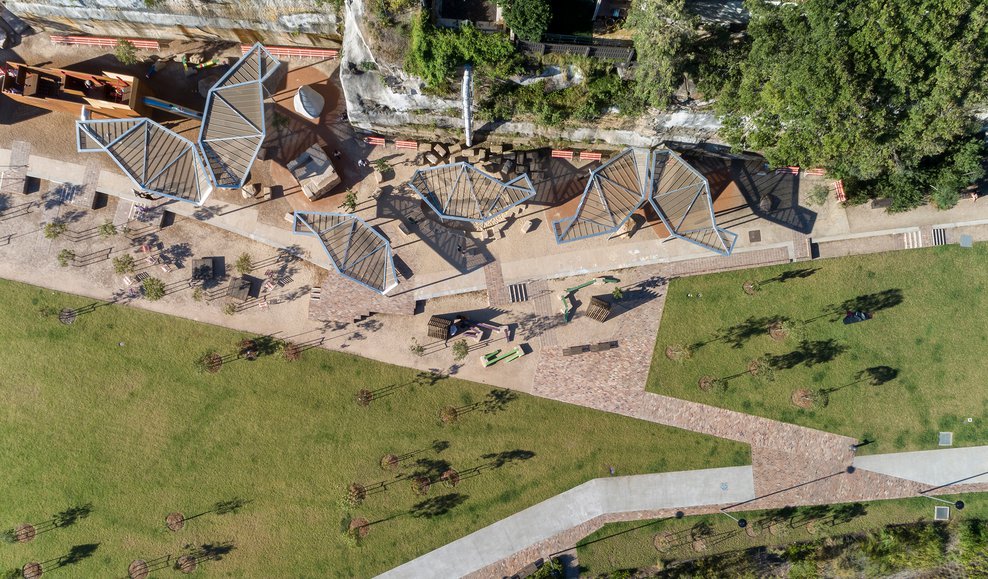 JMD design were lead consultant on a multidisciplinary team that prepared the design and documentation for a new 3.8ha park within the infill development project on the former Harold Park Paceway adjacent to the Tramsheds retail development.

The new park integrates with the open space network of Johnston’s Creek and the Glebe Peninsula and extends the design work undertaken by JMD design at Jubilee Park, the Crescent and The Glebe Foreshore Walk.

The new park at Harold Park provides important recreational, environmental and cultural assets that connect, expand and reinforce the existing open space systems around Johnston’s Creek and the Glebe Peninsula. The design creates a distinctive place, drawing on the existing setting, history, ecological and recreational opportunities afforded by the site. 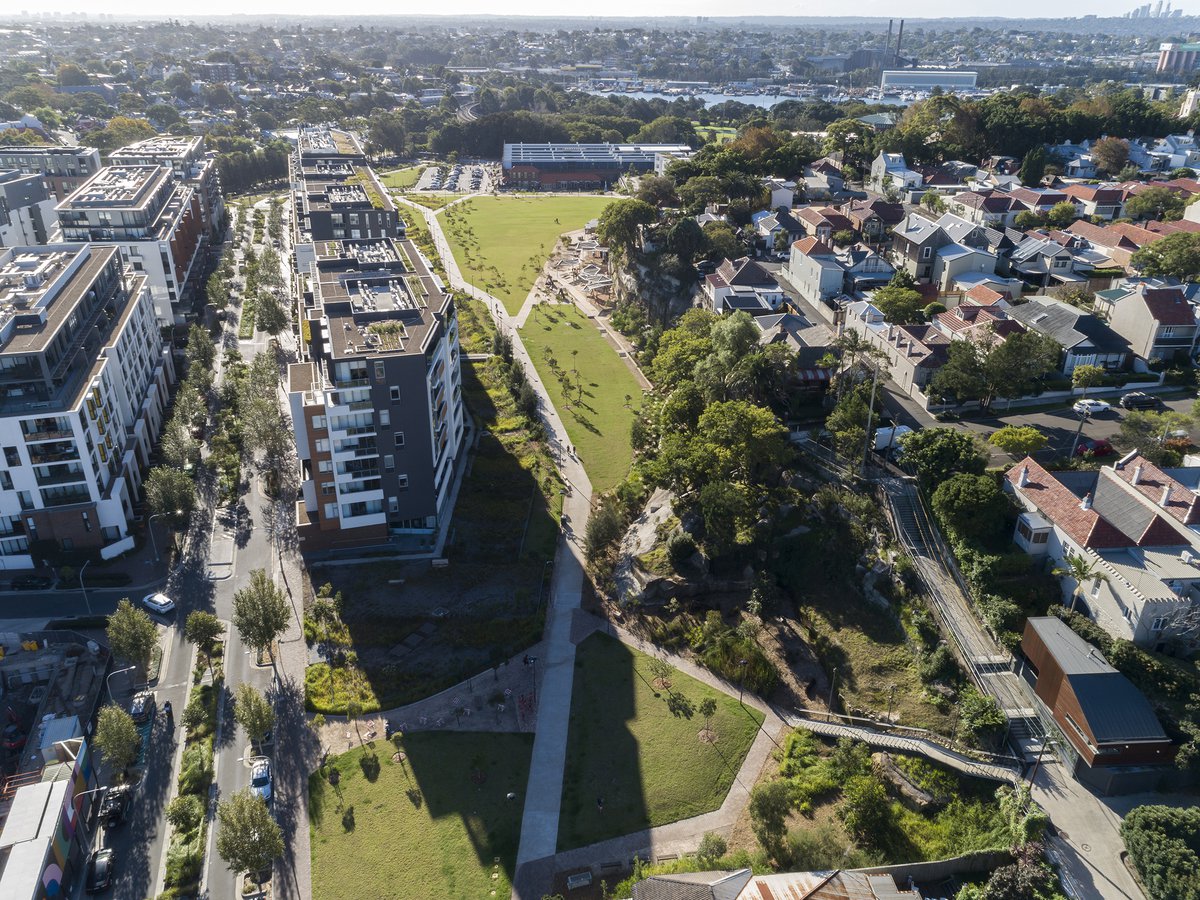 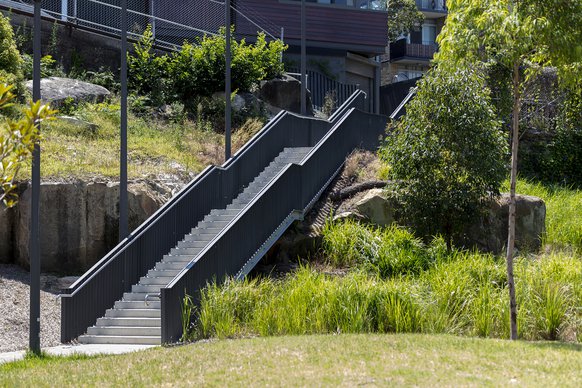 Bounded by a 16m high sandstone cliff along the eastern edge, a new apartment  development along the western edge, and the Tramshed precinct to the north, the new park is a linear space that provides a large informal green, a planted linear swale, a traditional garden combining historical and contemporary ideas, a children’s play space, raingardens, picnic and barbecue facilitites and new small bird habitat.

The park is organised as follows, the western edge provides the main circulation access through the park and contains a linear stormwater swale, at the base of the cliff along the eastern edge a half metre high terrace holds rain gardens, picnic shelters, bbqs, habitat zones and a playground. Adjacent to the raised terrace are informal groupings of trees and informal arrangements of garden furniture. The central portion of the park is occupied the Green. To the north of the Green, the Tramsheds Garden takes up the four metre level change between the Green and the Tramsheds. The southern narrower portion of the park retains an existing slope and sandstone outcrop, a detention basin, a secondary lawn and an access stair to the streets above the cliff. 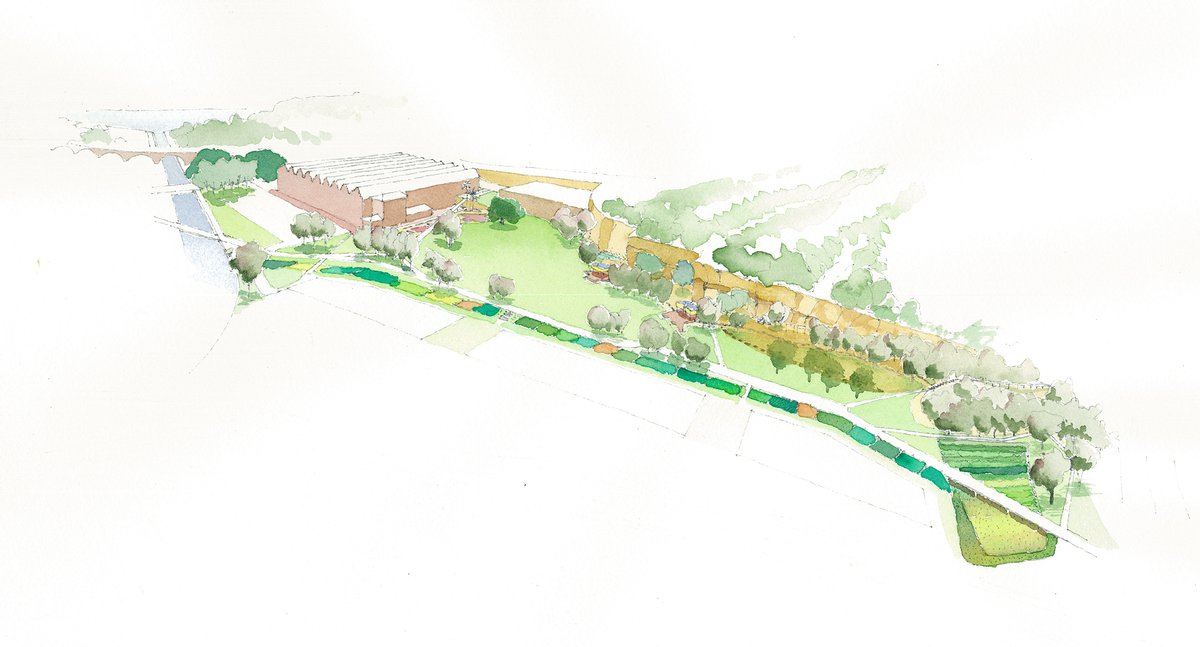 A series of pedestrian and bike friendly pathways and bridges connect all aspects of the park and its surroundings. The primary path along the western edge is a 2.5m wide concrete path edged with a wide brick band for urban furniture and fittings. Short bridges connects the park to the adjacent apartment neighbourhood to clearly signal the public nature of the open space and create a clear arrival. Between the primary path and the residential development a linear stormwater swale runs the length of the park. It is planted with textural mix of grasses, sedges and small shrubs to create a defining edge between the adjacent development and the public domain. 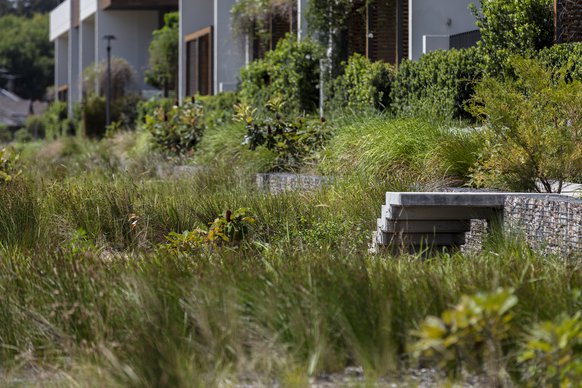 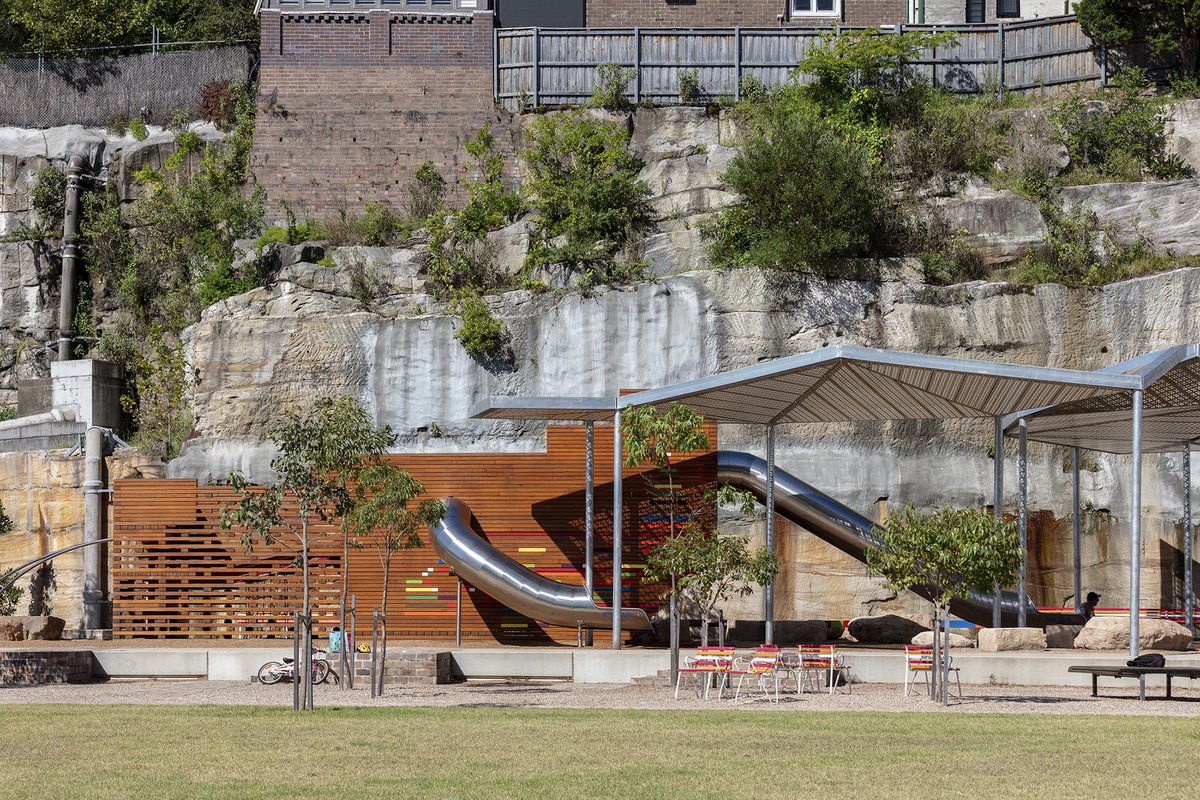 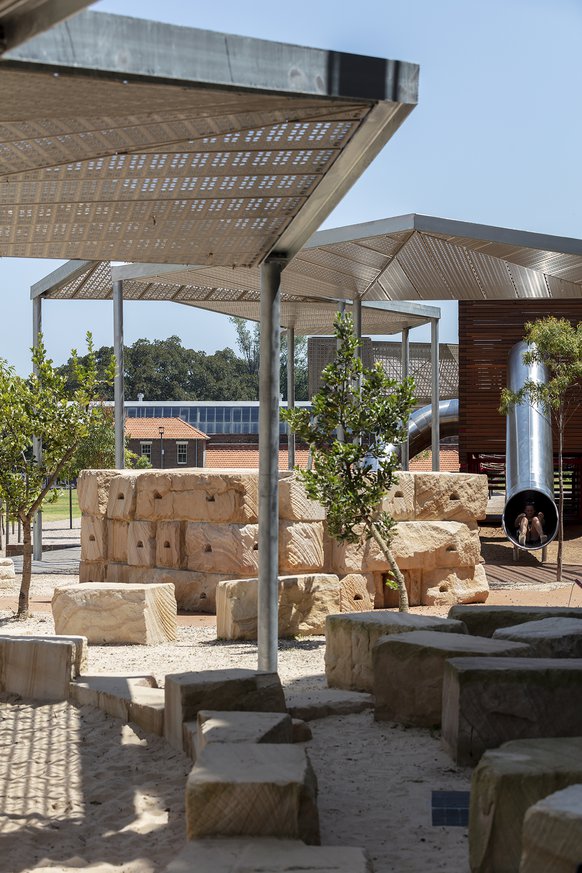 The terrace at the base of the cliff is retained by a series of curved concrete walls interspersed by brick access stairs and two platforms that invite occupation and circulation. The platforms are constructed as brick stacks and provide the bases for the picnic shelters (TZG Architects). The simple stack motive of the platforms is repeated in the playground where a stack of timber forms a climbing structure that supports tunnel slides and a stack of sandstone echoes the cliff and provides a simple climbing challenge. The sand pit is formed by a linear arrangement of sandstone blocks whose centre has been carved out into a smooth void to hold the sand. The use of blocks is continued in the rain gardens to create informal seating and stepping blocks. A 9 metre long colourful bench is placed at the base of the cliff for carers. The play elements include swings, a slide and low key water and sand play ideal for active and imaginative play. 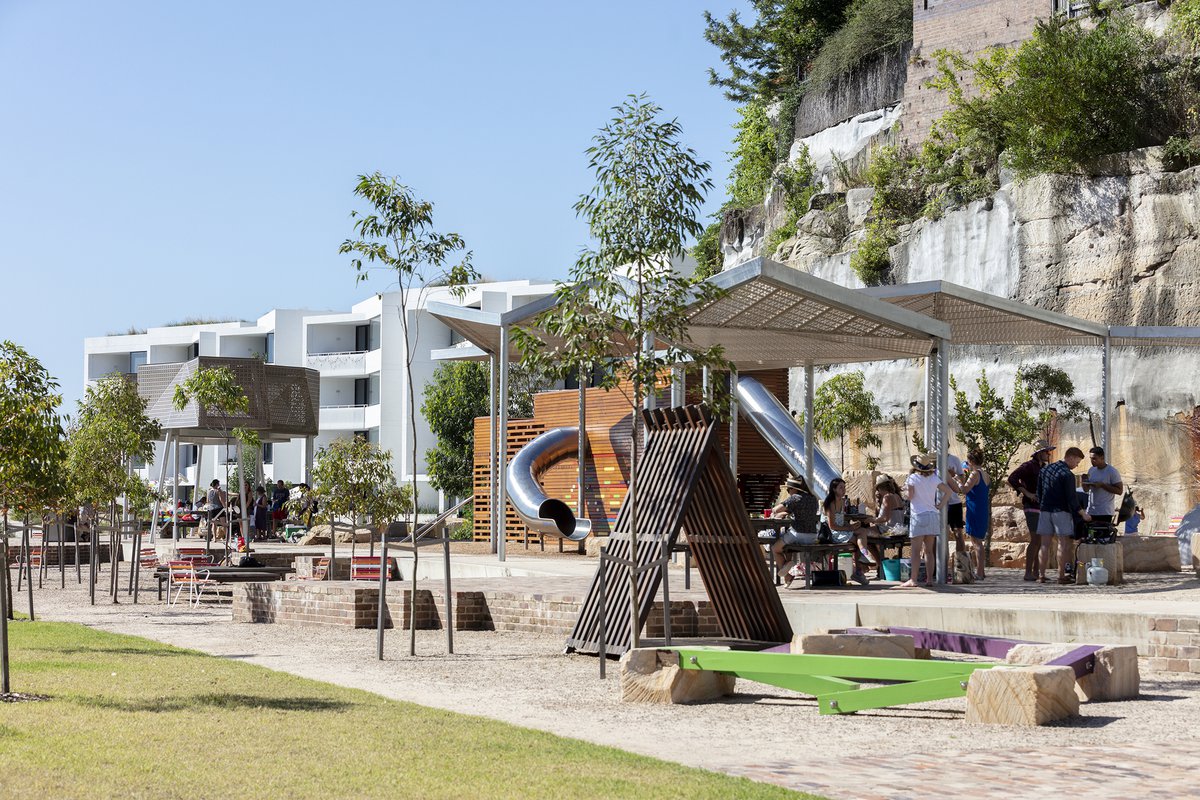 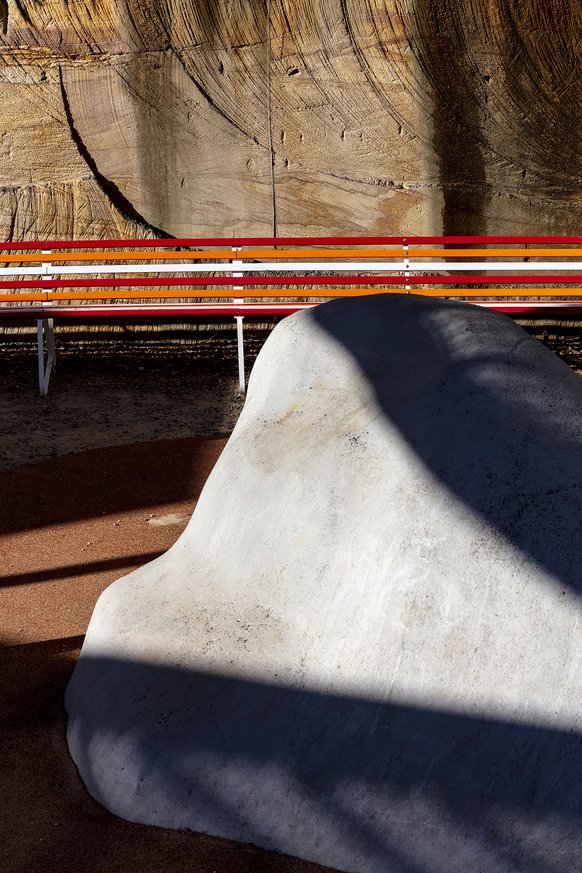 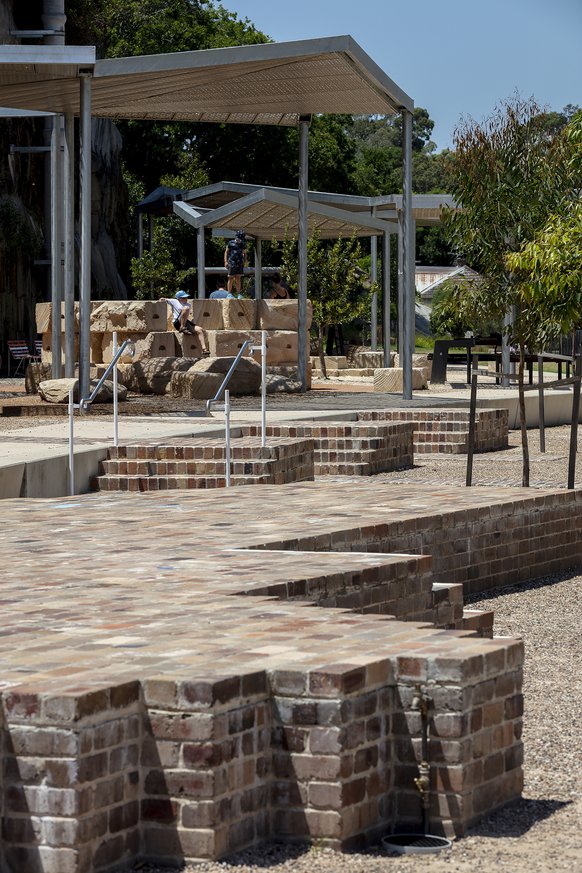 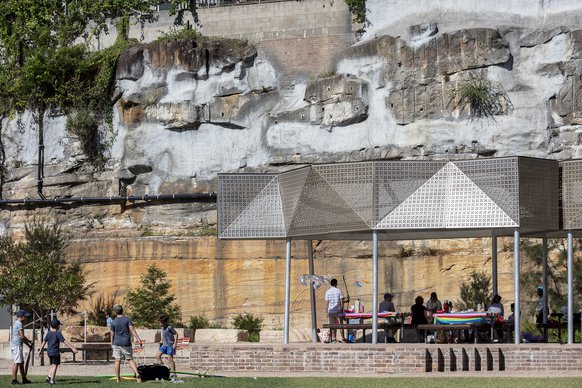 The Green is the primary open space and comprises of a levelled lawn for informal ball games surrounded by clumps of endemic trees that provide scale, shade and habitat. At the northern edge of the new park, in the location of the former Tramshed Garden, is a contemporary ornamental garden with a rich mix of textural plantings whose layout is abstracted from a pressed metal ceiling pattern commonly found in the area in the late 19th century. Intertwining brick pathways provide access through the garden and up the slope to the Green. Within the garden a number of timber benches provide rest spots from which to view the adjacent heritage building and the garden.

The design for the park insists on the public nature of the open space, maximises connectivity to the surrounding street network, provides a variety of spaces and allows for a diversity of users. The design is unified by its special attention to context, the use of a simple material palette of brick, sandstone and timber, its use of endemic vegetation and its formal dialogue with the cliff and the Tramsheds. 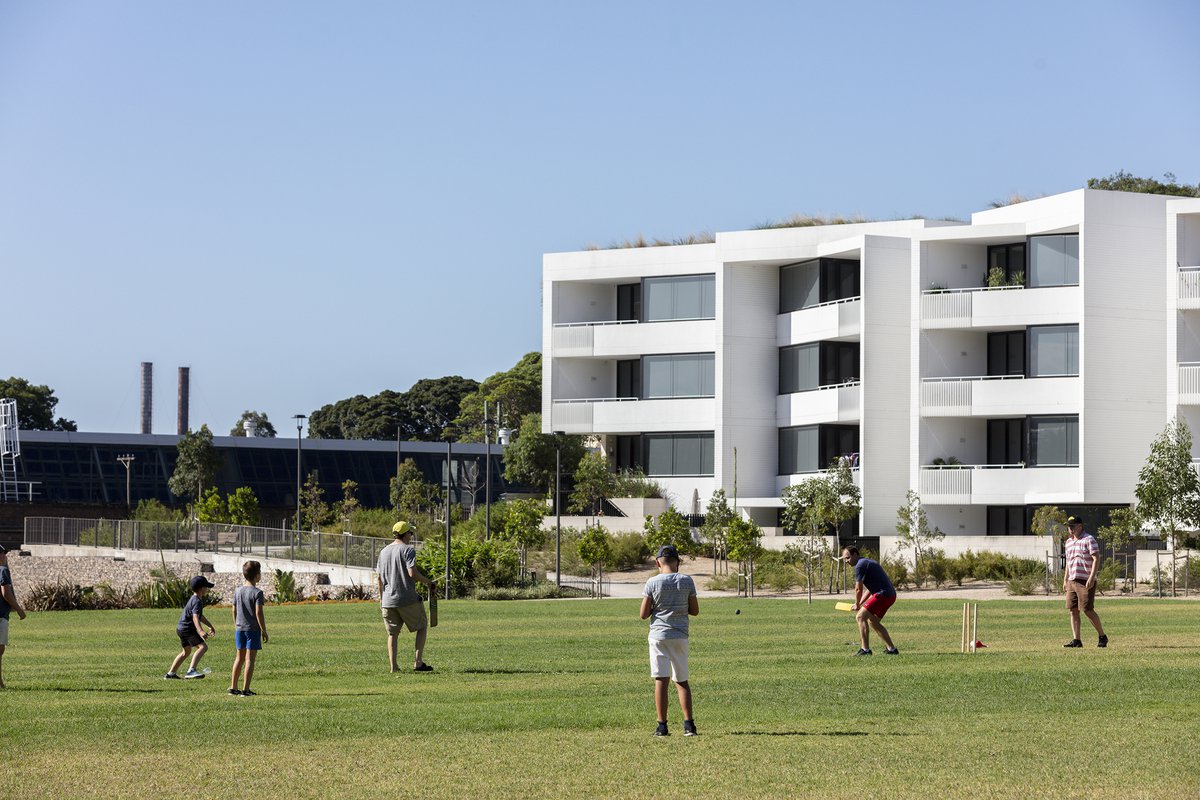 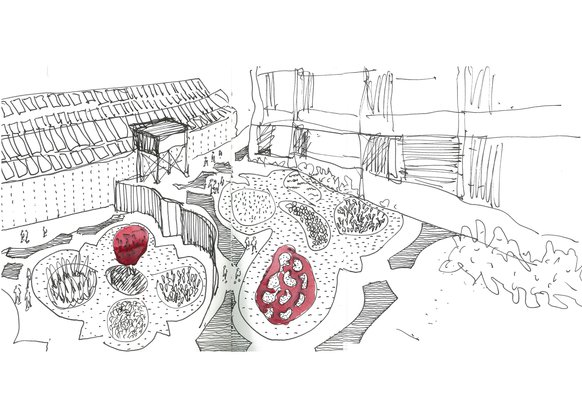 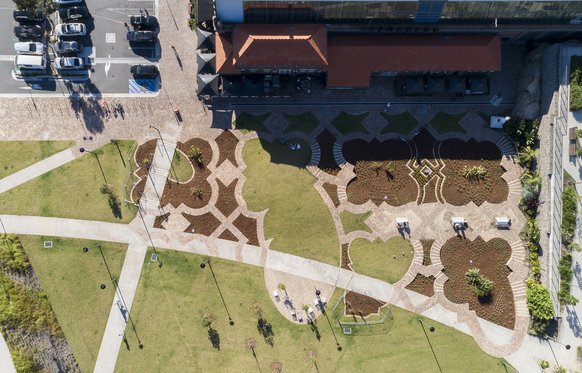 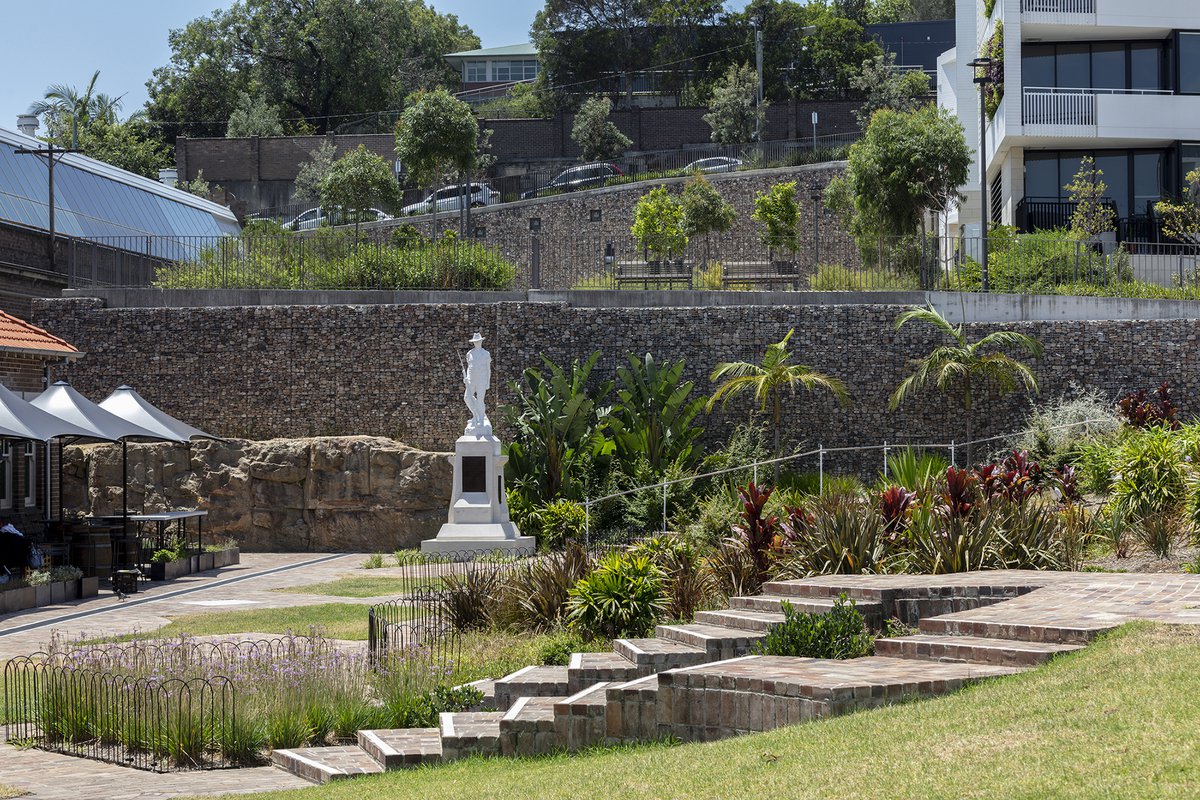 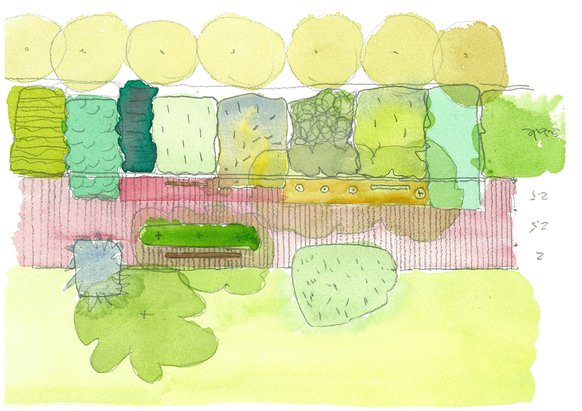 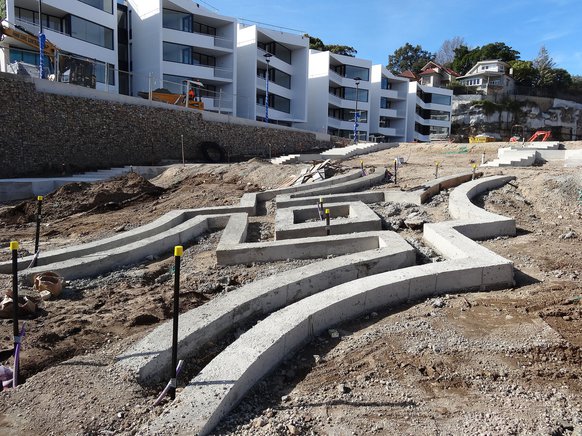 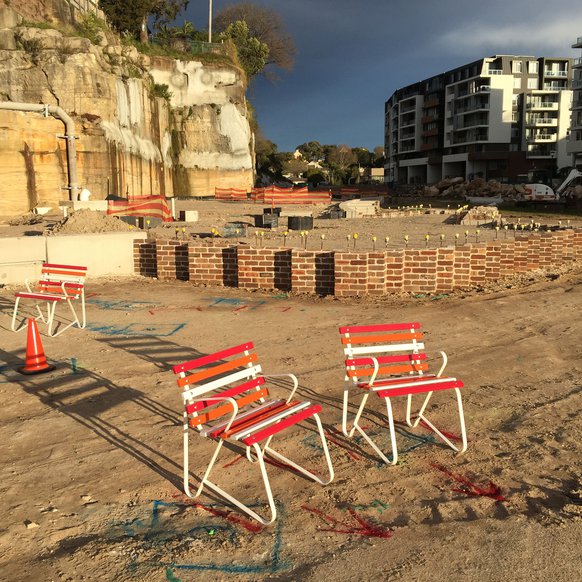 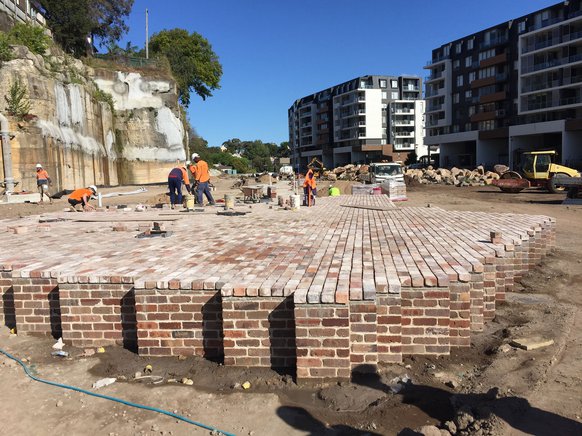 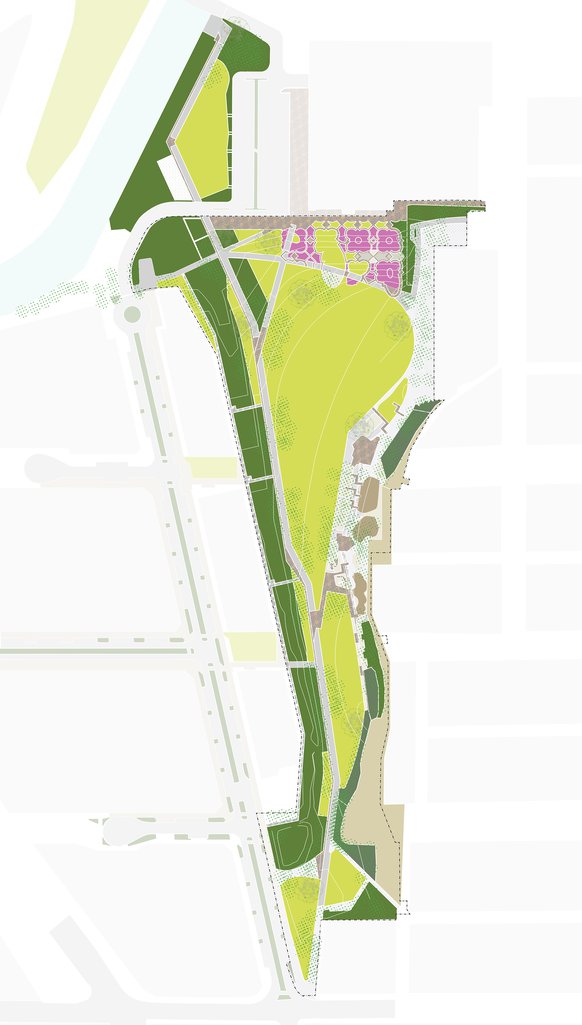 The project required extensive co-ordination with developer Mirvac’s Infrastructure Team throughout the construction of the project.  This allowed the location and relocation of utility services to be optimised. It also allowed a co-ordinated approach to cliff face stabilisation and site grading to maximise the public domain benefit of unencumbered open space.