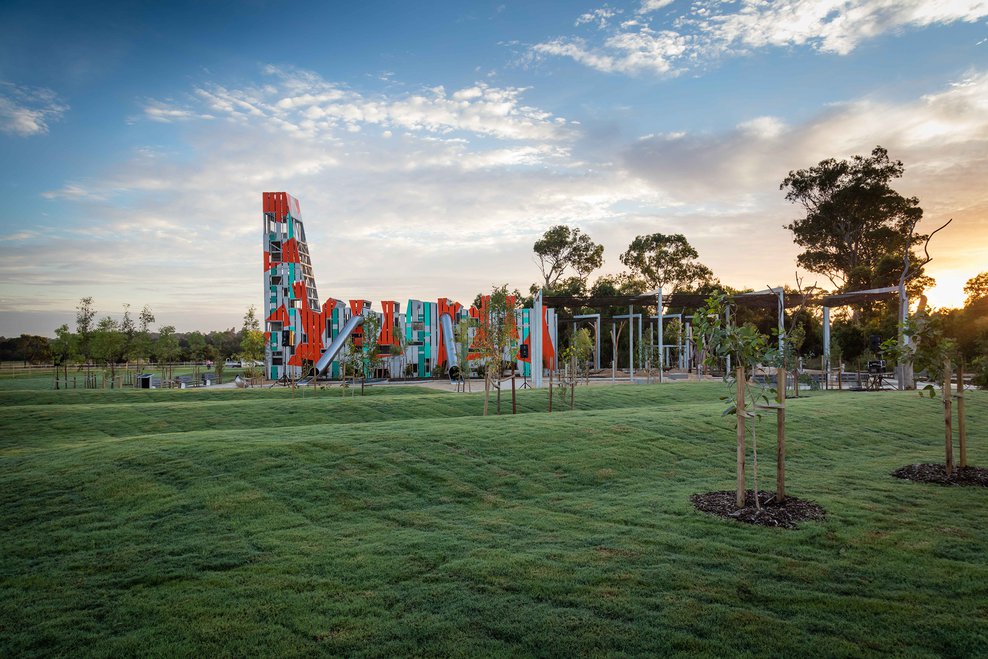 The design of the new park extends the commitment made in the Masterplan to celebrate the existing qualities of the site, preserve the sense of tranquillity at its centre, and carve out an identity for the park from undifferentiated industrial rural landscape that pervades the area. An identity that places high value on this landscape.

The first stages were completed in January 2017 and comprise of; the new entry from Doonside Road that bookends the forests the Redgum Runway and the Southern Green Belt; playground, the large lawn, large picnic lawns, car parking and access roads, and amenities and picnic shelters designed By Stanic Harding Architects.

The new entry borrows from the industrial scale and language of its surrounding landcape where large metal sheds, overscaled street signs and freeway structures abound. The new park announces itself forcefully in this supersized landscape through the new entries frame, that measures out and makes visible the volume the two new forests will grow to. The braced framing speaks to the structural language of the play structures and the yet to be constructed creek crossings.

The Redgum Runway is a one kilometre long grid of Eucalypts that flanks the Second World War Emergency Runway. The forest is intermittently cleared to create opening for gathering and informal play. The southern Green Belt acts to screen the new tourism development along the great western Highway. The two forest converge at the entry on Doonside Road in the east and splay out in the west, opening the view to the sky and the distant Blue Mountains. 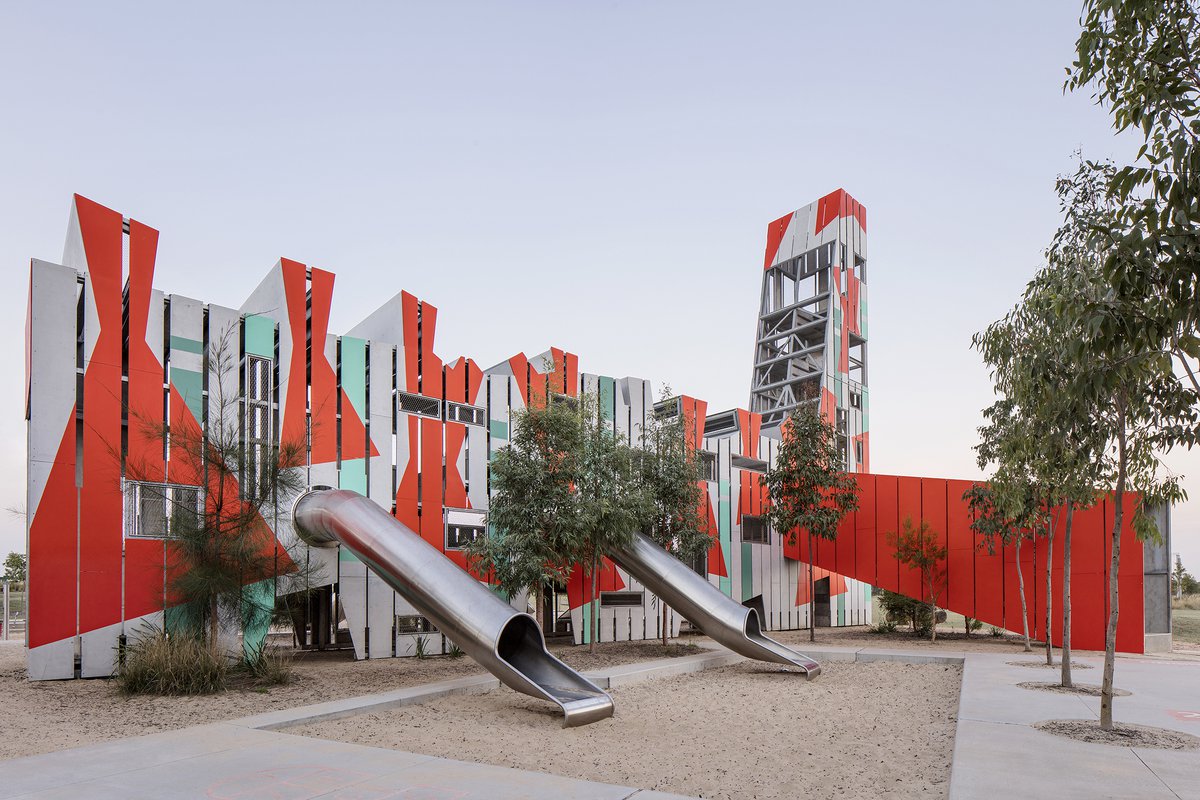 The new playground is comprised of three parts, arranged around the new large cross lawn. Play is dispersed around the large cross lawn to encourage movement across larger expanses and to allow some separation between the more boisterous high energy activities and the area aimed at younger children around the treehouse.

The westernmost part of the playground is a 50 metre double flying fox that borders the western arm of the large cross lawn. It races riders toward the cusp of the hill and the distant western sky.  Close by the swing sets also propel users toward the sky and the expanding landscape that slopes down to the creek and toward the distant silhouette of the Blue Mountains.

Near the high point of the eastern ridge, nestled between existing woodland regrowth and the new large cross lawn is the main body of the playground.  Here a 12m high,  patterned treehouse announces play to the surrounding parkland.  An undulating lawn, proprietary play items, nature and water play encircles it and combine to make this the most intensive activity zone in the park. 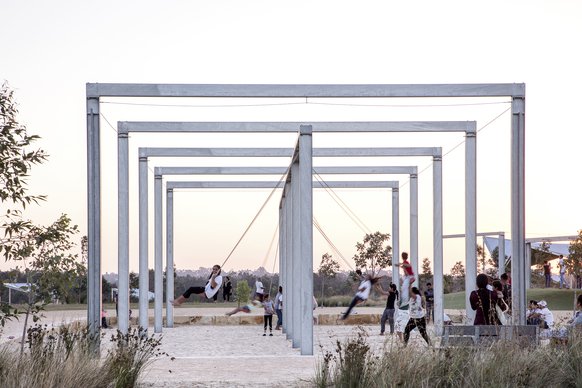 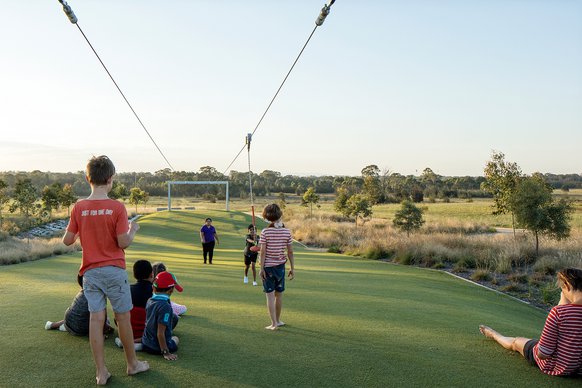 The Treehouse is reminiscent of an ant farm, an airplane fuselage and tail, an insect and an industrial structure. The multileveled structure appears to be propoed up by four tall tunel slides and an entry shoot. Internally the floors rise and fall in unexpected ways, openings provide access between floors whilst the tail or head allows an ascent to a 12m high viewing level oriented to the west.

The first floor gives you access to the smaller slides, whilst the second level takes you to the higher faster slides. The arrangement of floors, connections, slides and ramps provides a multitude of circuits around and through the structure in an unscripted sequence of play.

The adjacent nature play uses the existing landscape, preserved logs, boulders and small mounds to create an environment to explore and play through. The water play comprises of an arrangement of rectangular sandstone blocks and water pumps. The blocks have been robotically carved to create channels basins, rills and drops along and into which the flow of water can be directed by hinged gates.  The ensemble sits in a large sand pit that provides the children with further means to manipulate the flow of water across the sandstone.  Covering the nature play is shade net supported on steel portal frames that echo the structure of the swings, flying fox and entry gates. 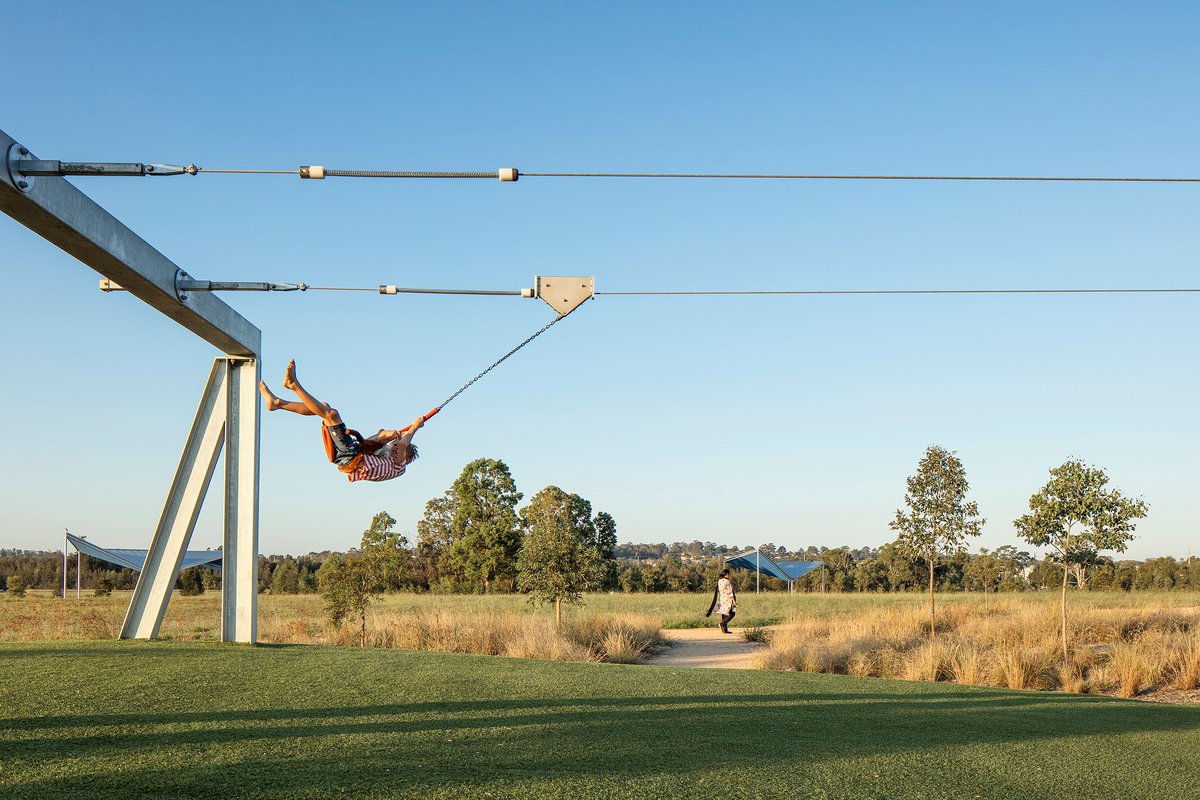 The large cross lawn runs from the ridge northward toward the creek, its gentle slope and orientation serving as a natural amphitheatre for large events. The large cross lawn is a two armed cross cut through the surrounding pasture grasses. Its shape reflects the former model aircraft lawn runway that has been maintained for picnics and passive recreation. The runway points to the prevailing breezes. Located around the edges of the large cross lawn and lawn runway are picnic shelters of varying sizes designed by Stanic Harding Architects, barbeque facilities and a network of paths that form the first stages of the “Loop”. Informal paths are mown into the grass to connect the lawns to one another and to the network of informal paths in the park.

Two new carparks serve the playground at the top of the ridge and the dog exercise near the Doonside Road entry. The material choice and layout is chosen to de-engineer the carpark and allow it to blend with the landscape as much as possible. Planted drainage swales have been used in favour of kerb and gutter.

The outline of the two forests has been inscribed in the parkland by the entry structure at its eastern extremity and within the park by metre tall marker posts. These signal the volume of vegetation to come and set up the planting grid. The forests continue westward accross the creek and draw the smaller western portion of the park back into the ensemble. 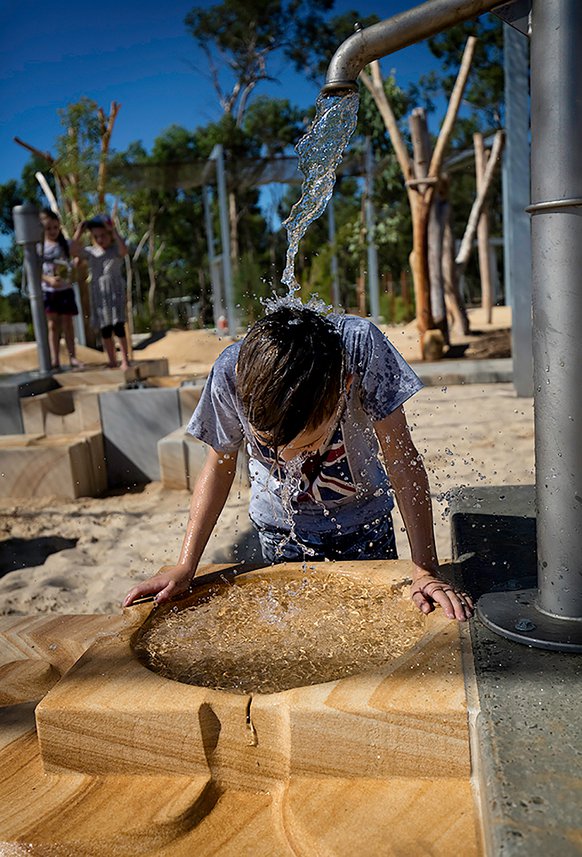 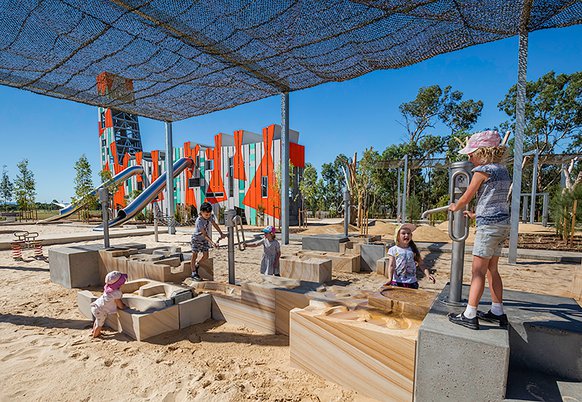 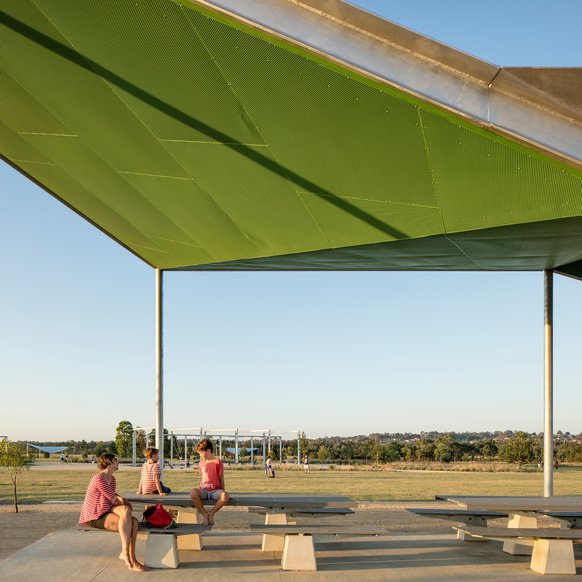 The “Loop” has been designed as a path that meanders in and out of the forests and connects with the existing path on the western side of Eastern Creek, where existing Cumberland Woodland vegetation is preserved, a former pacing track delineates a picnic lawn and event space.  New sporting facilities are accommodated in the north western corner of the site.

Two bridges yet to be installed have been designed to cross Eastern Creek and complete the “Loop”. The northern bridge is a two level structure with a route at grade that allows cyclist and pedestrians to cross and an elevated route that crosses the one below and takes pedestrians to an elevated vantage point above the creek with views over the park. In contrast the southern bridges have a horizontal emphasis that are designed as a series of islands and short bridges that skip through the floodplain and skirt around the southern edge of the “Heart”. The short bridges are made up of horizontal decks with an upright side that act as billboards in the landscape, marking the route across and through the vegetated creek line to the other side. The vertical sides provides a seating nook and shelter. The bridges form part of the family of structures that share the language of standardised steel section, bracing, fixing and construction drawn from the context of motorway billboards, traffic signs and large industrial sheds. 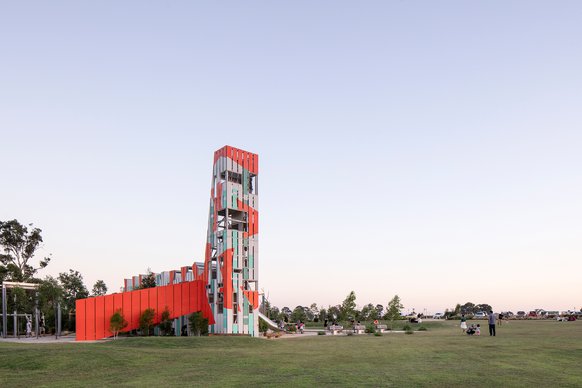 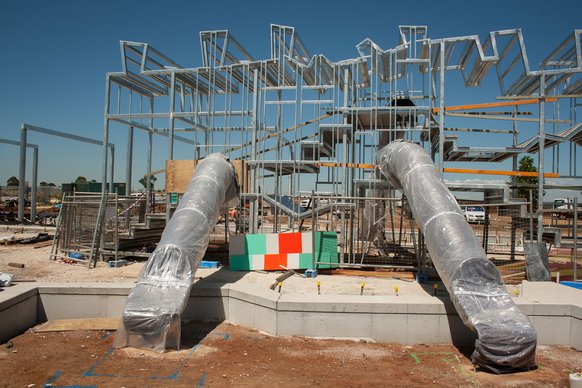 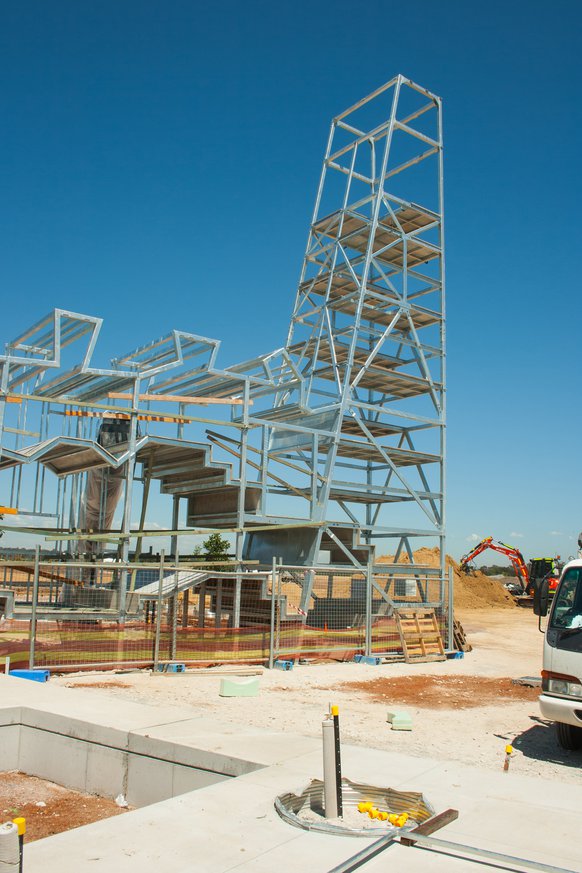 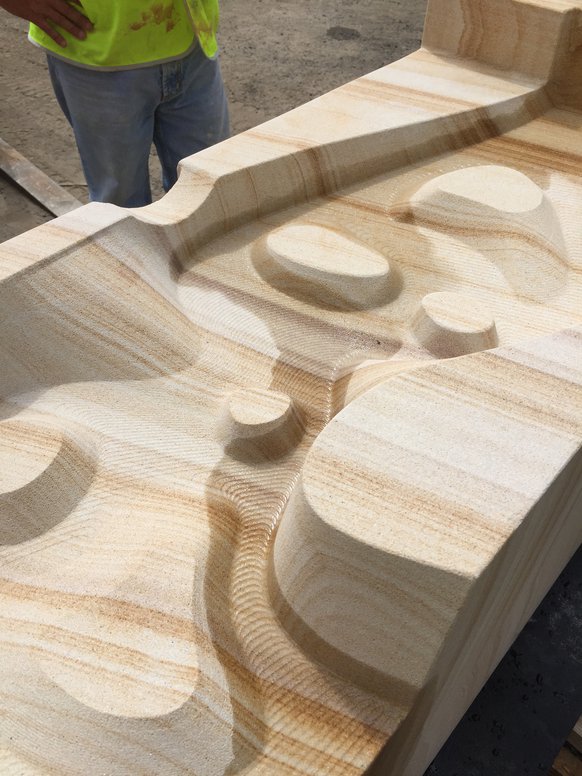